Lee said:
Nice big juicy update: I took receipt of all the powdercoated bits Monday whilst the last of the parts arrived this week. Todays job was to build the front end.

Blimey, you certainly cracked on once I left you alone

There are only two products required to make the universe work properly: Duct tape and WD40.
If it moves (and it shouldn’t): Duct tape. If it doesn’t move (and it should): WD40.

Huge update, two days worth of work crammed into this postFriday was an assembly day starting with building the rear arms and getting it all ready for refitting.

Laying out the powder coated bits, they look so good. 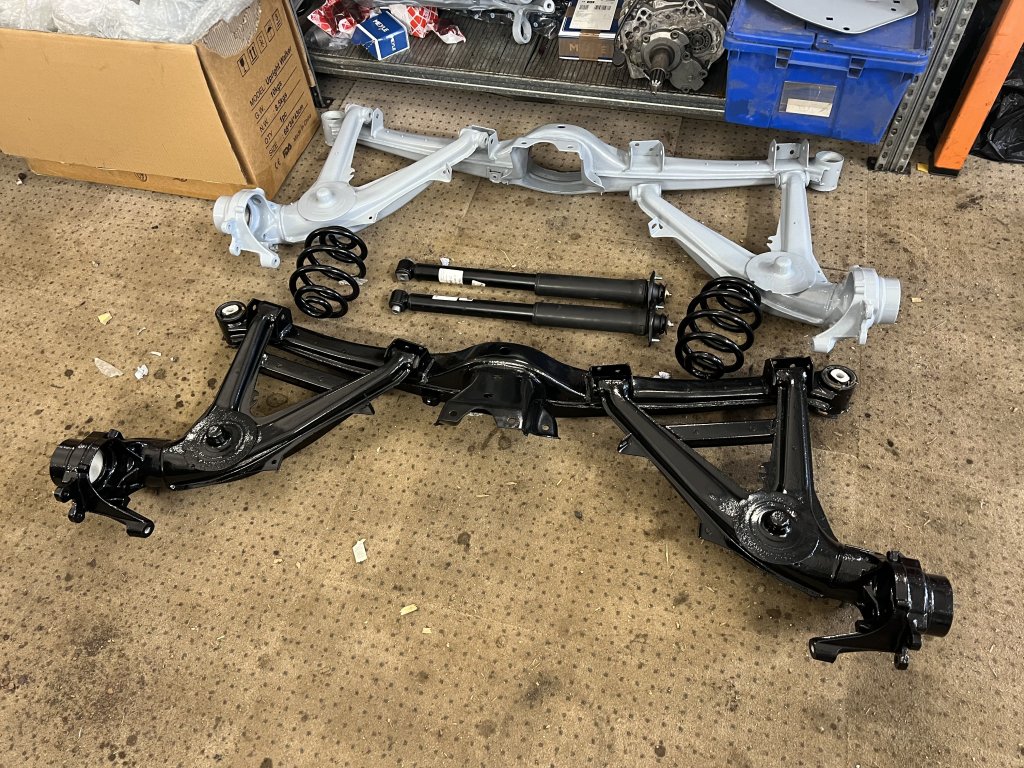 First job was getting the new wheel bearings in. only the finest Febi parts, along with a new bung in the oil hole.

next job was removing the old bearing race off the hub, I do this by making a slot and giving it a whack with a Hammer.

arm and hub ready once the backing plate went on. 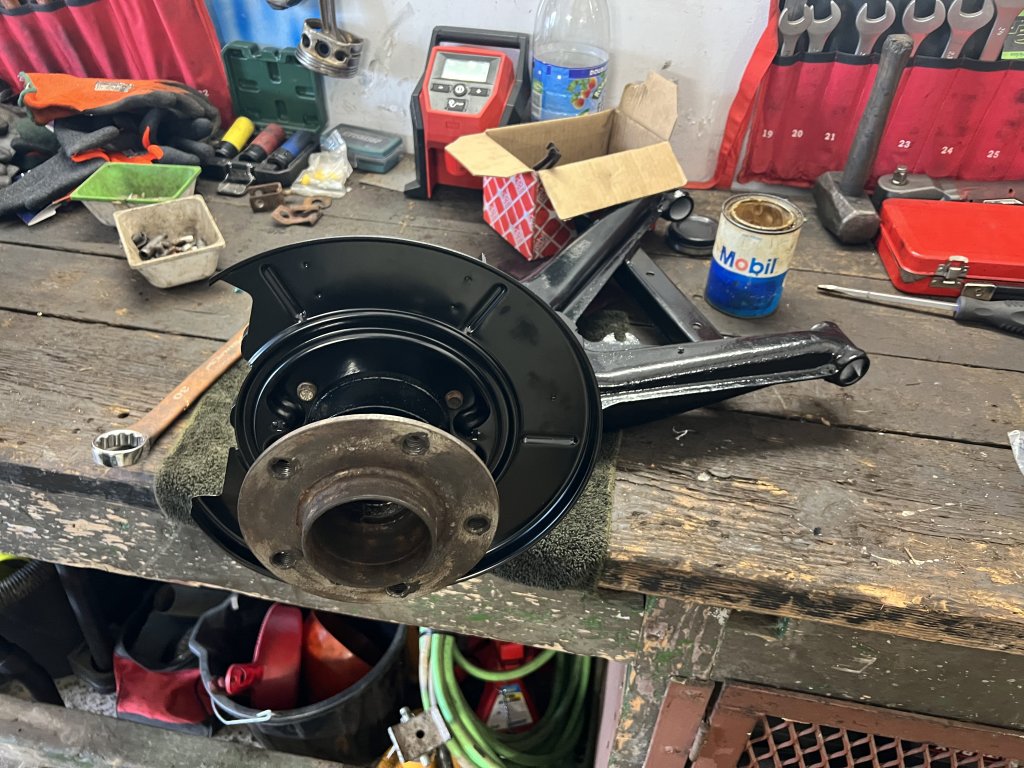 next up we fitted the swing arm bushes. 5min job on the vice. 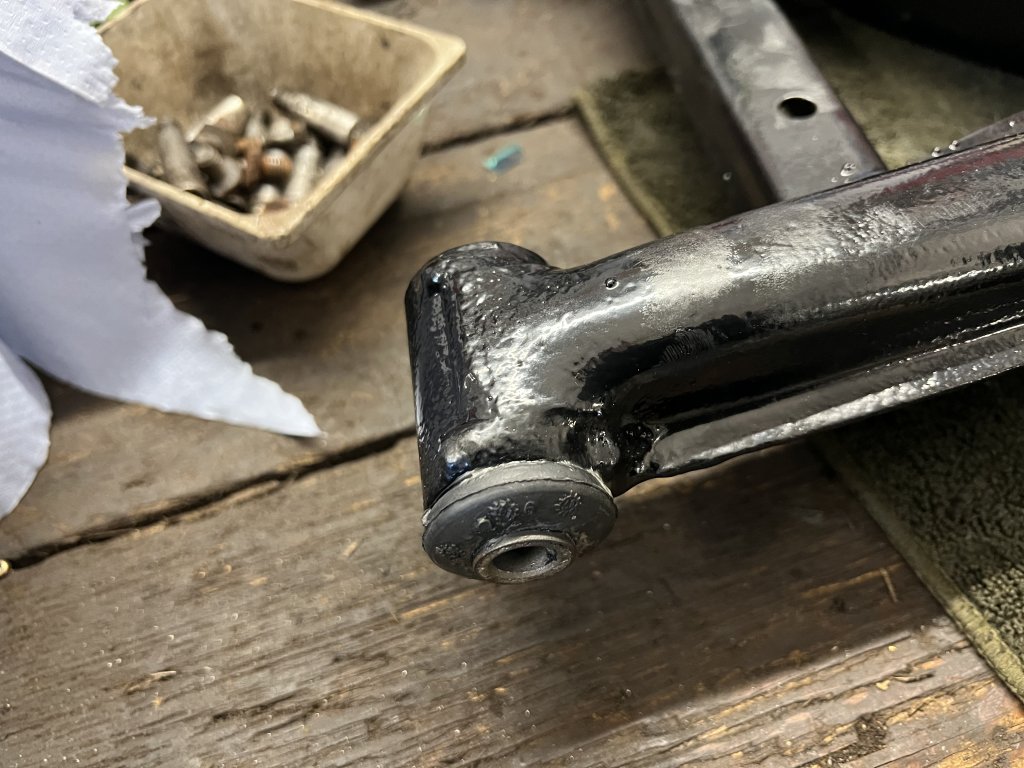 then a quick coffee starring at a busy garage. You can see a shinny finished Nessie MK2 finished.

once the arms are done it’s then onto the fidderly bits. Handbrake mech 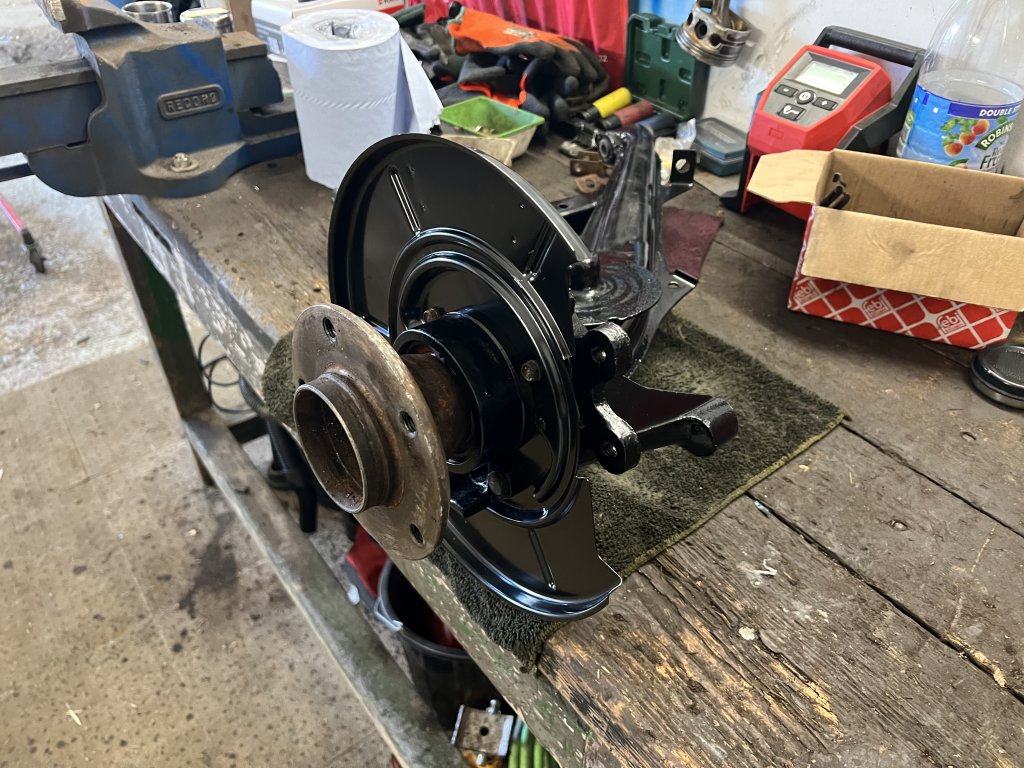 Followed by the disc, carrier and handbrake cable. 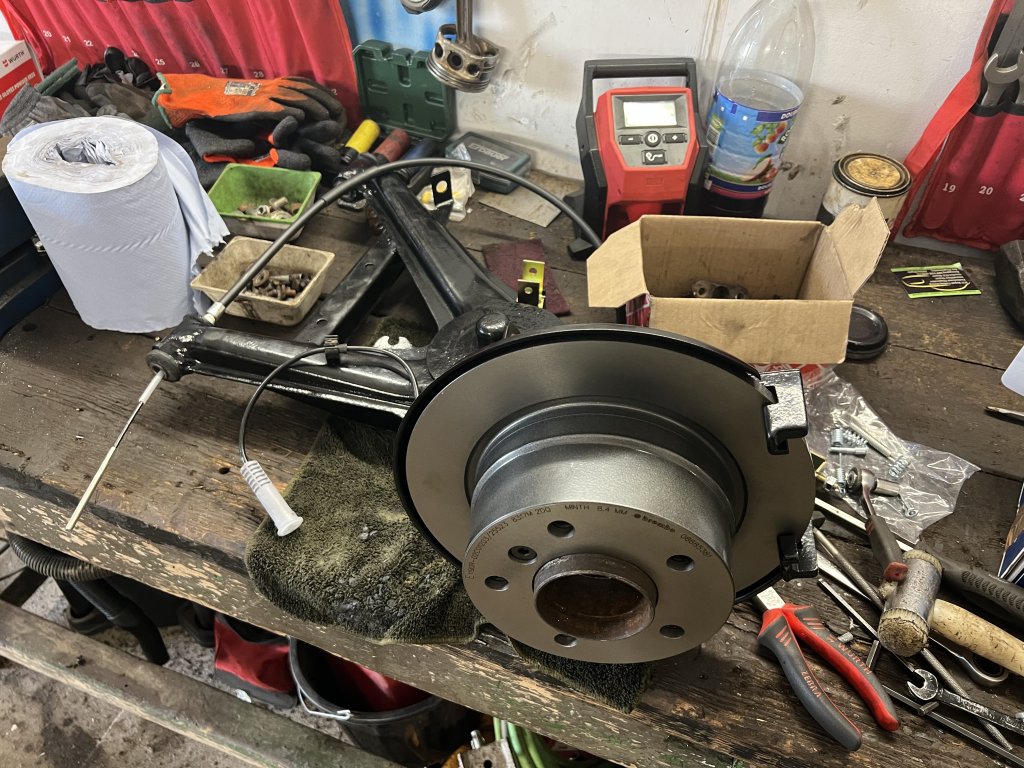 final job for the day was giving the diff a quick clean and bulk of the paint so it can be handle on Saturday.

everything laid out ready for a mega Saturday. 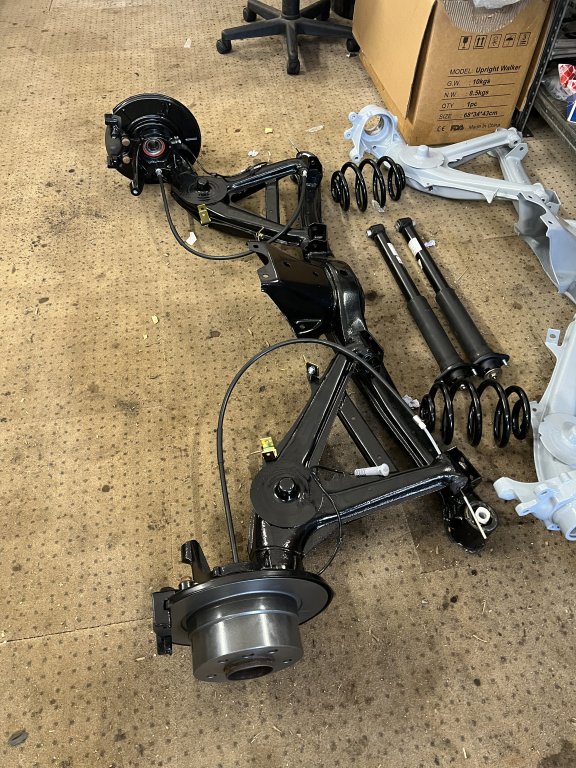 Today was a mad one. We got the gearbox out and the subframe in.

Continuing with the Diff we started giving her a spruce up. Old bush removed and new one in. 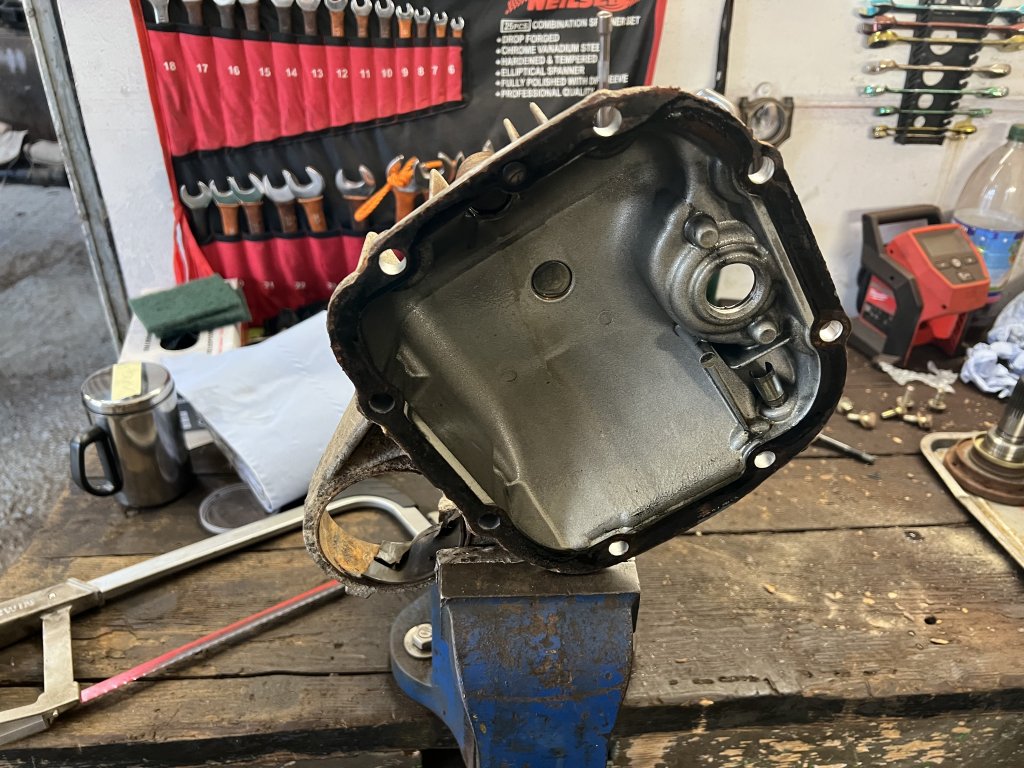 New paper gasket in along with speed sensor plate. This gives you a good view inside confirming it’s an Torsen LSD unit.

whilst the diff was drying we removed the gearbox. Showing a very clean flywheel, and hardly worn clutch assembly.

gearbox off now for new seals and shift pins. Will get a pressure plate and clutch assembly ordered.

Last item fitted to the swing arms were the drive shafts. Annoyingly we normally order new but the new supplier has already run out so this time we’ve had to clean up the existing shafts. 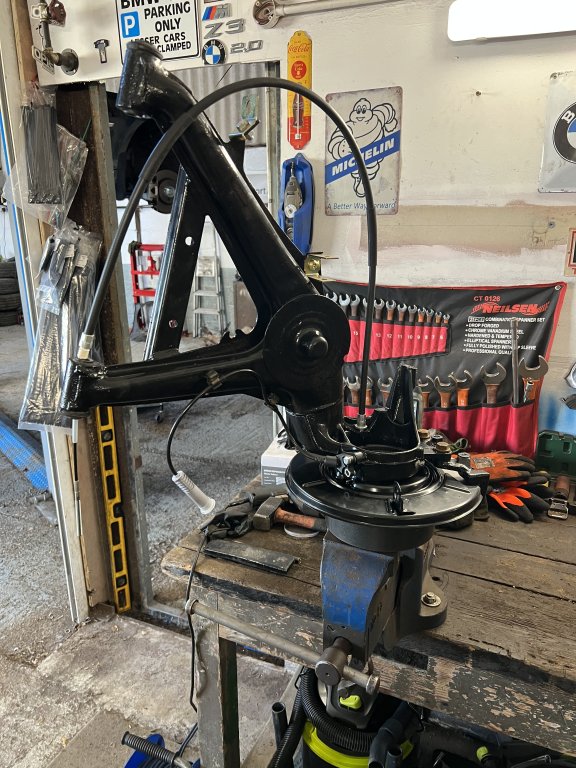 so along with the diff we can build the subframe assembly back up.

Whilst doing this the guys cleaned and under sealed all the seems. New fuel tank straps fitted.

Then onto the main event we refitted the subframe. 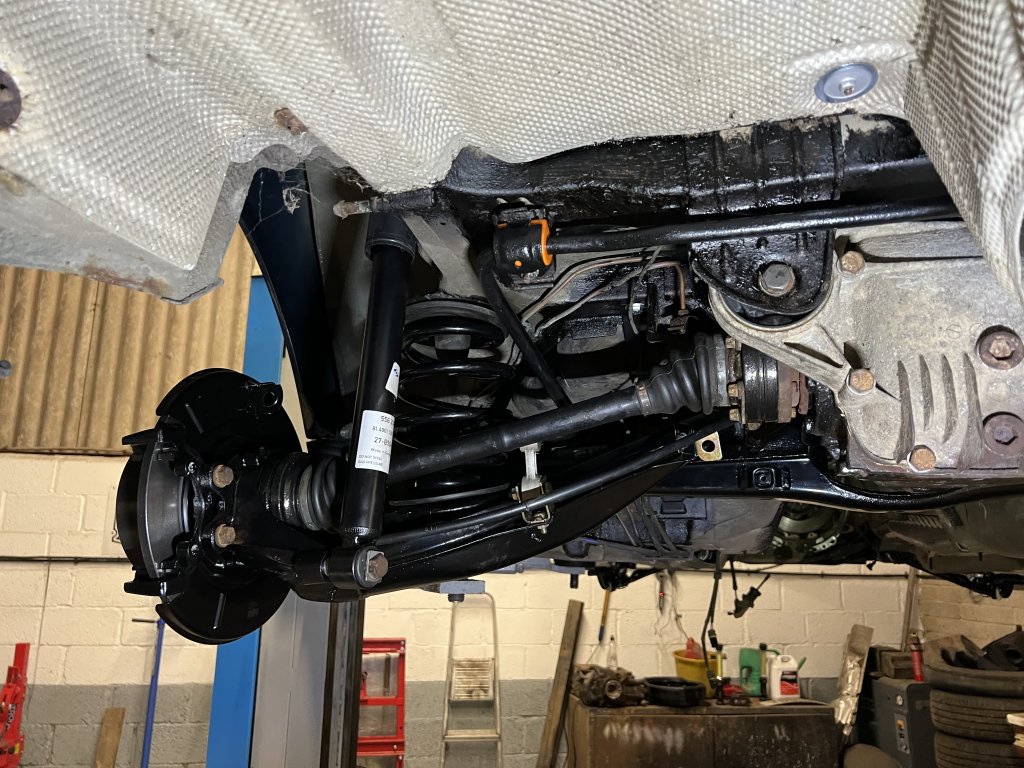 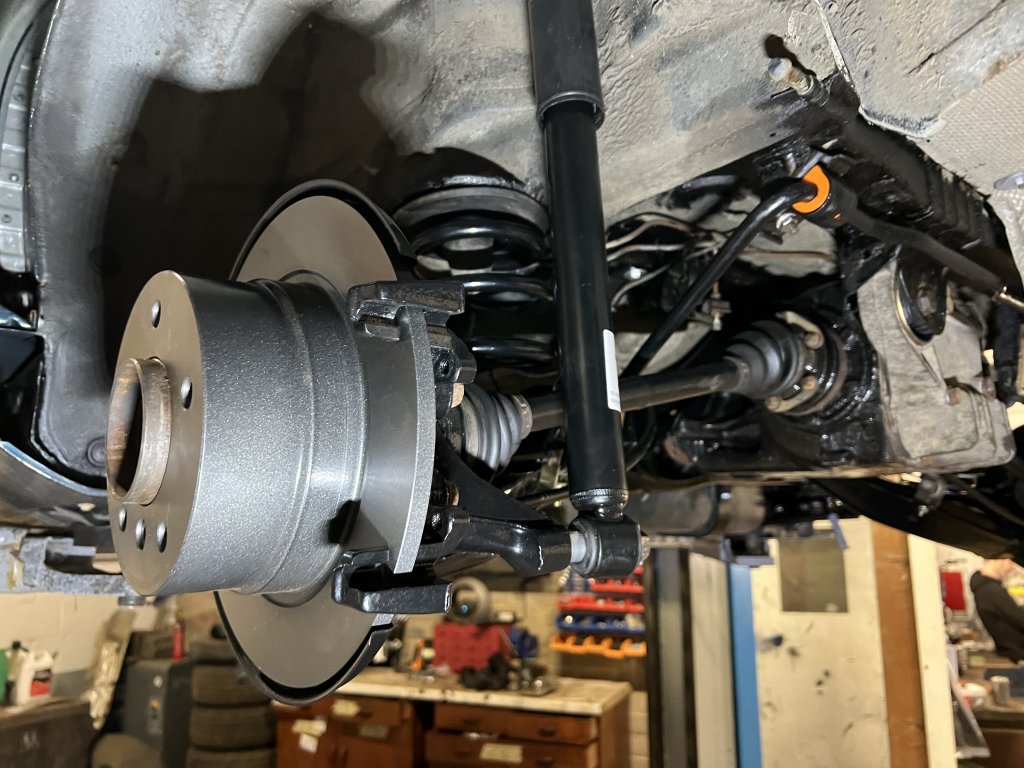 another week down and we’ve done a ton of work. I have the last few bits to order now I know what’s needed. The end is very much in sight. Mary is keeping good company over the weekend with the Jag land yacht. 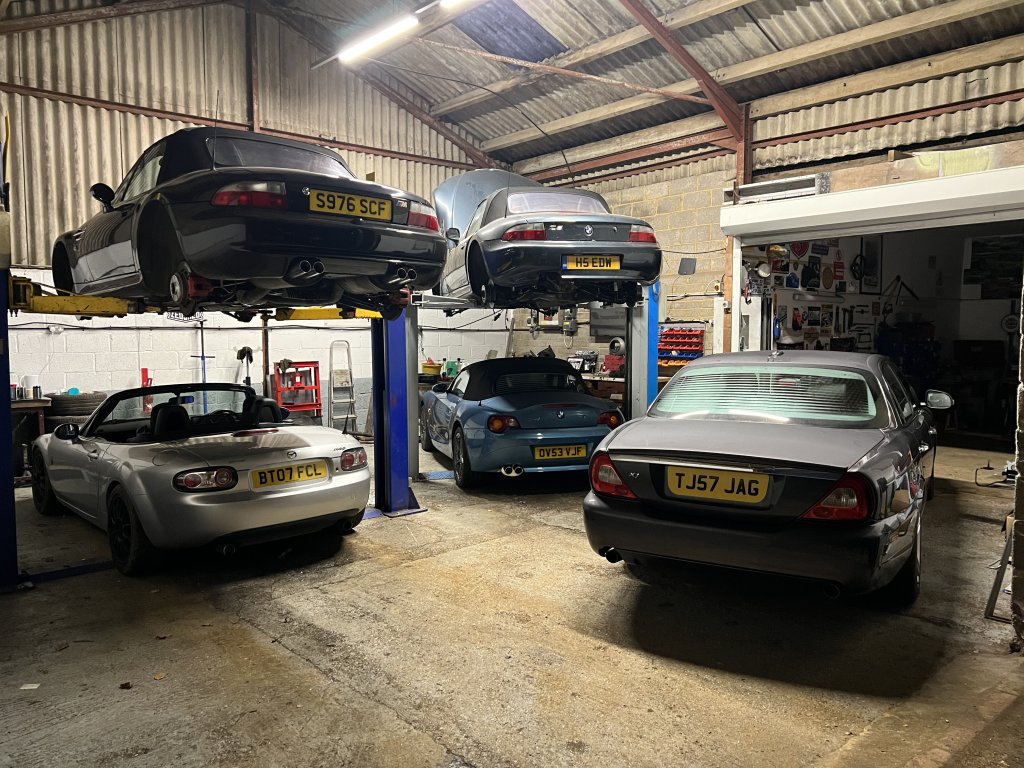 There are only two products required to make the universe work properly: Duct tape and WD40.
If it moves (and it shouldn’t): Duct tape. If it doesn’t move (and it should): WD40.

Nailed it yet again guys

It's not how you arrive, it's what you arrive in that counts.

Wozas got a lot done there.

Another big 3 days worth of updates inbound. Starting things off with replacing the gearbox pins and new clutch assembly. 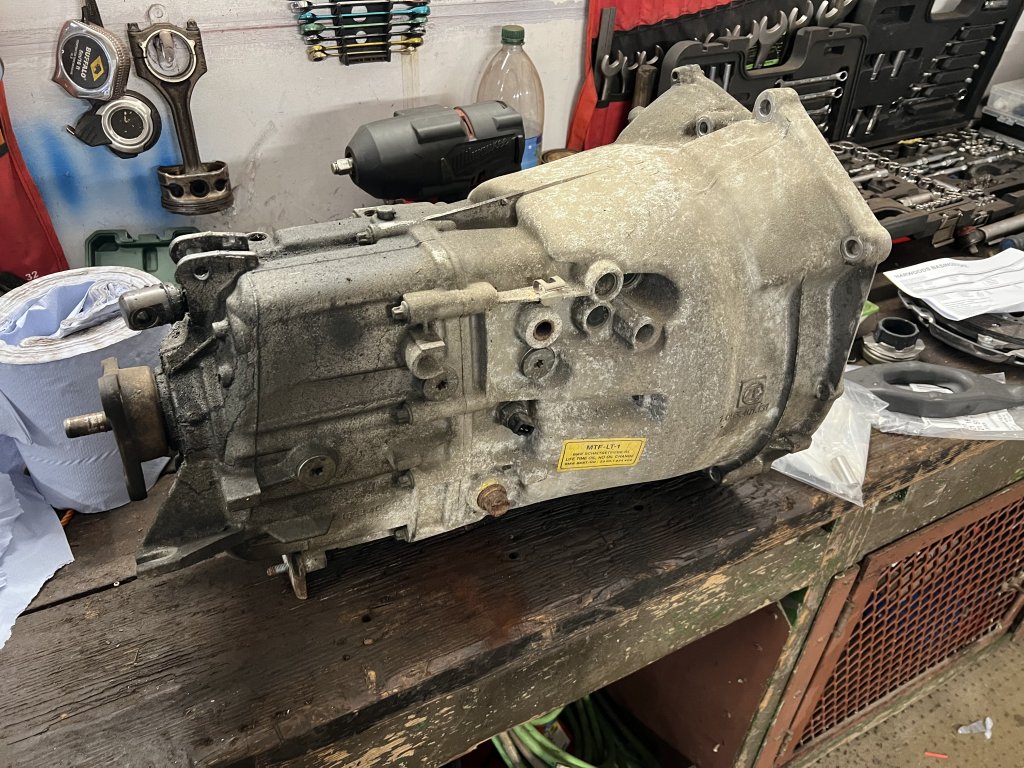 All the new bits ready to be fitted 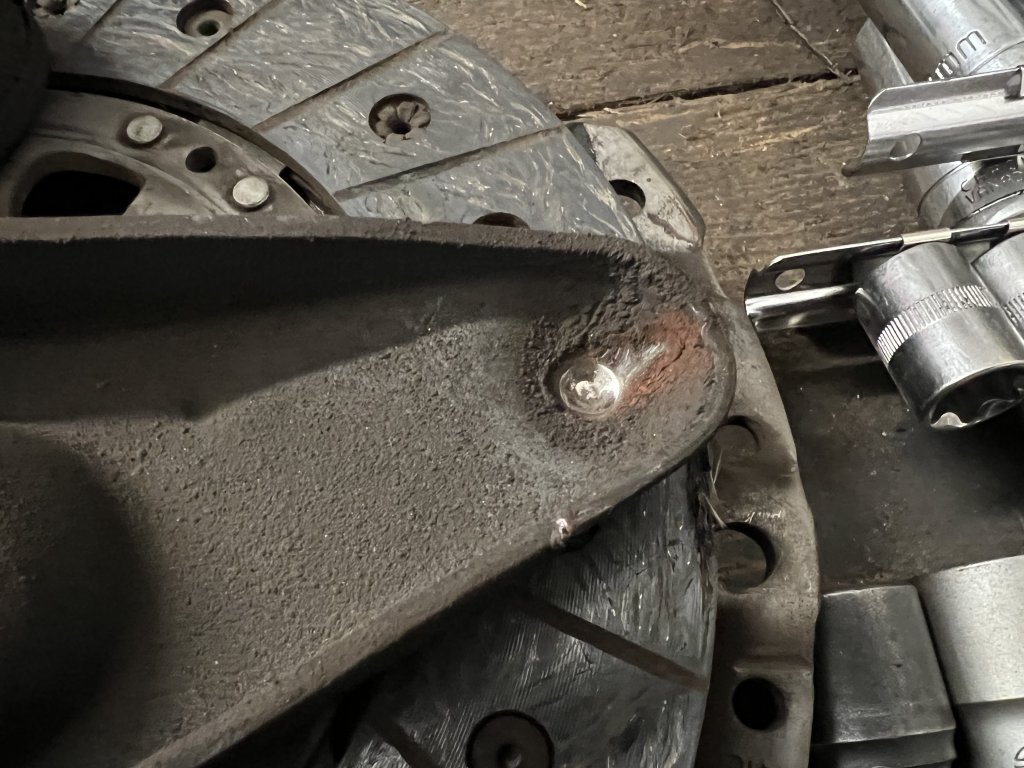 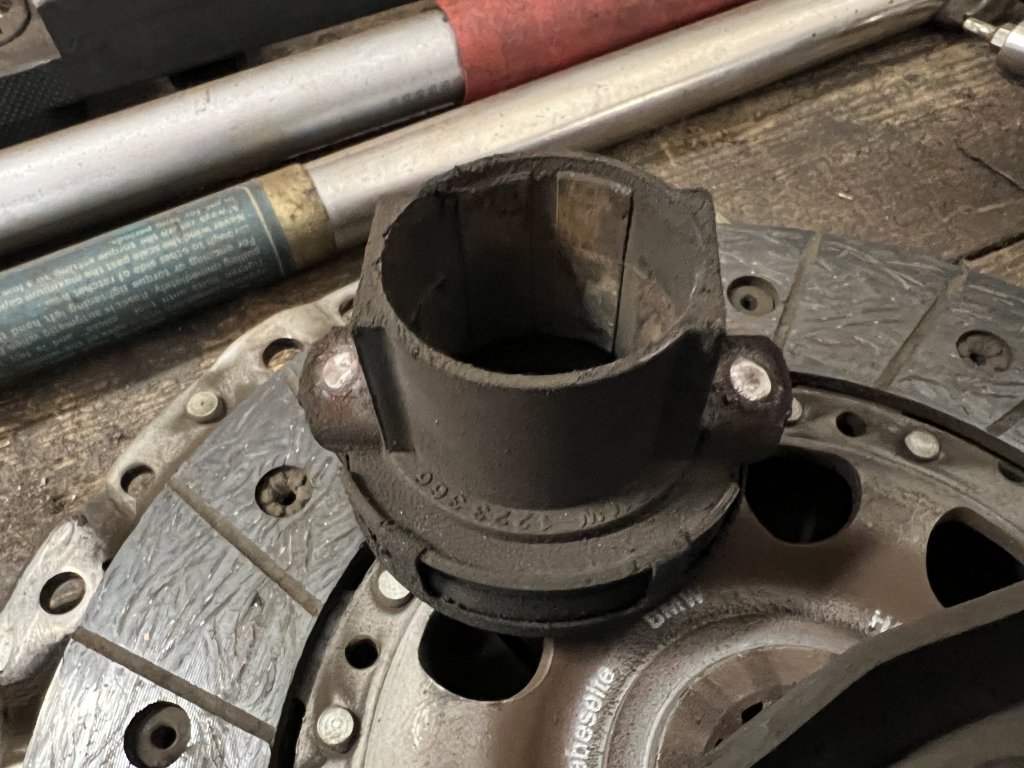 First of the shift pins going in

they’re the easy ones.

then onto the main problem pins, you can see here the liner worn 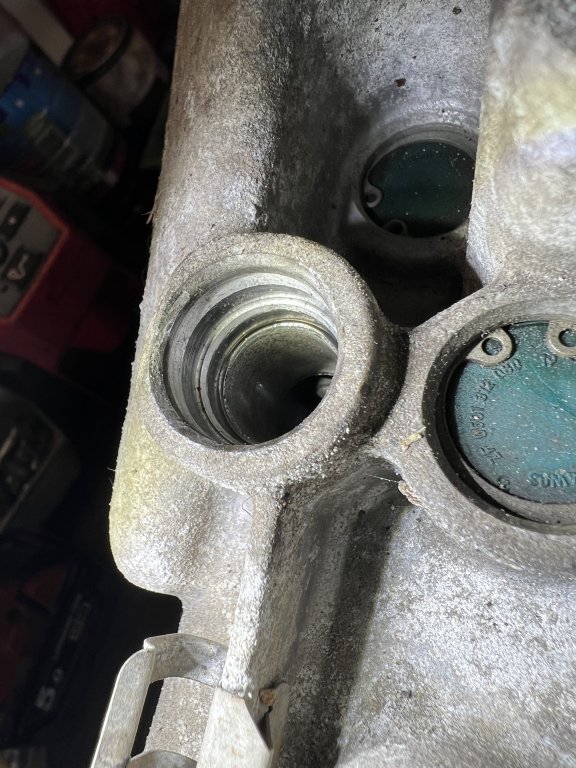 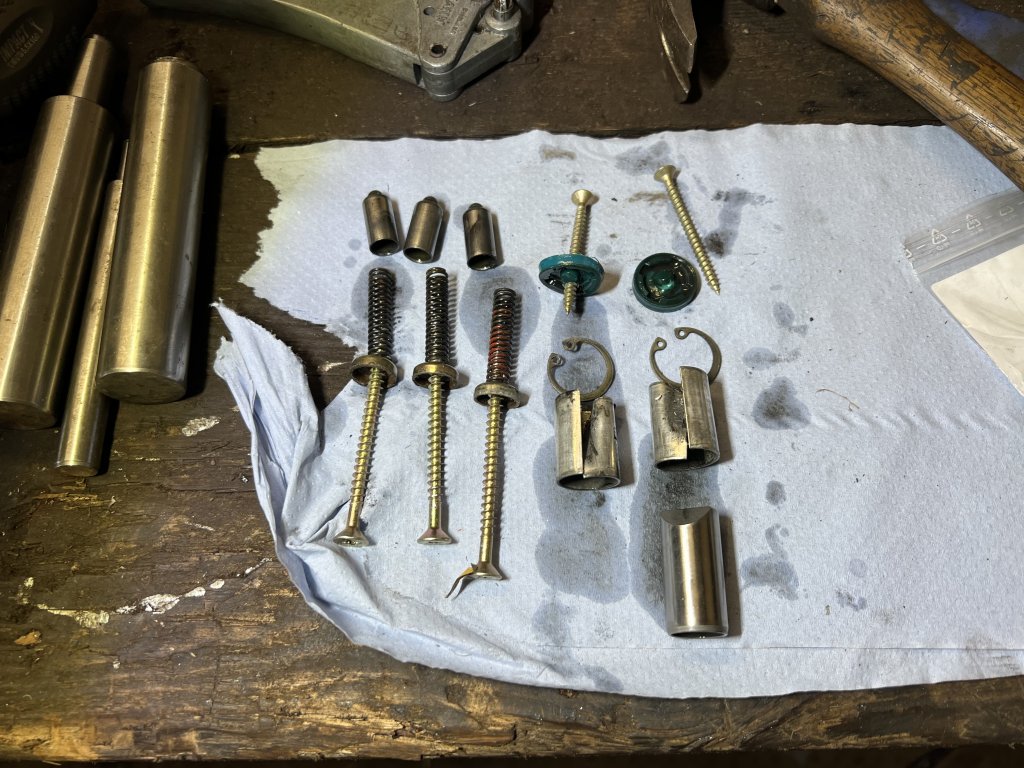 With the gearbox out it would be rude not to fit new seals. First main seal removed 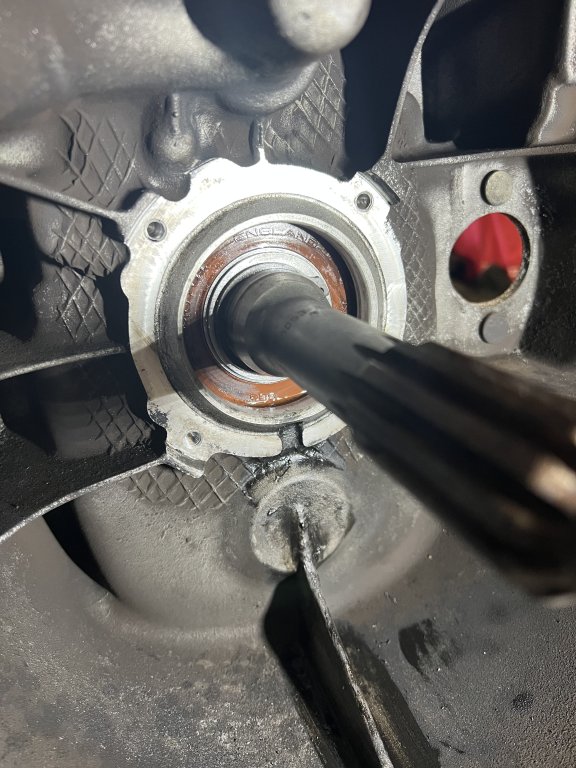 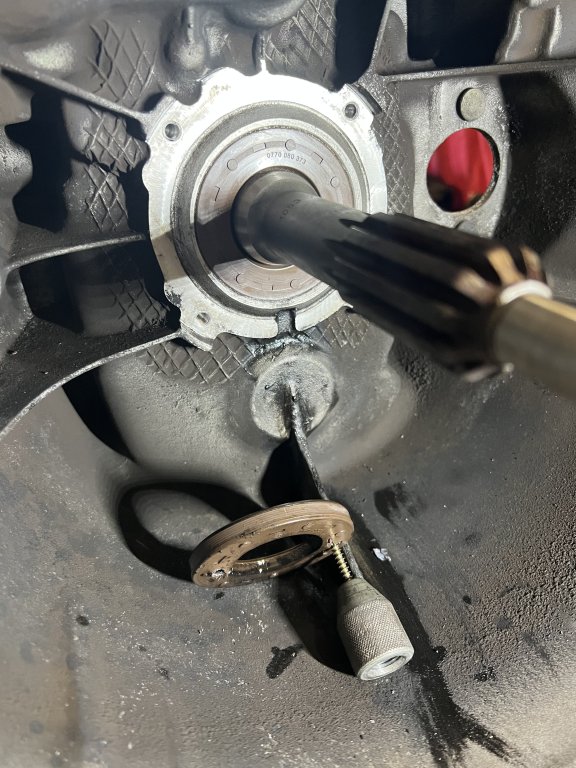 then the selector seal, this seal is always the one leaking. 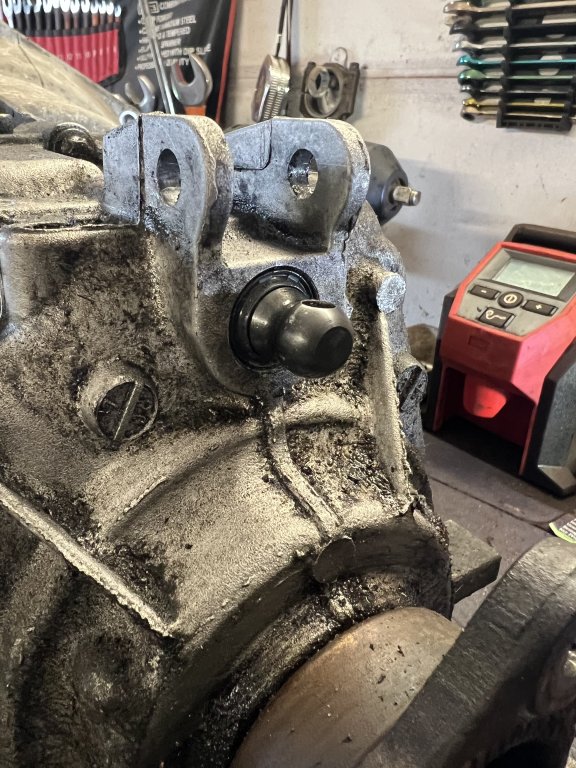 with the gearbox done we installed the clutch assembly

now ready for the gearbox

hour later and she’s all torqued up with a new Guibo bush.

lots of work going on in the engine bay over the last two days. We noticed way too many cracked vacuum lines so it was time to tidy it all up and get the engine running right. First thing we did was fit some new Aux belts and remove the cat blower unit.

new throttle cable in and now running the correct route. 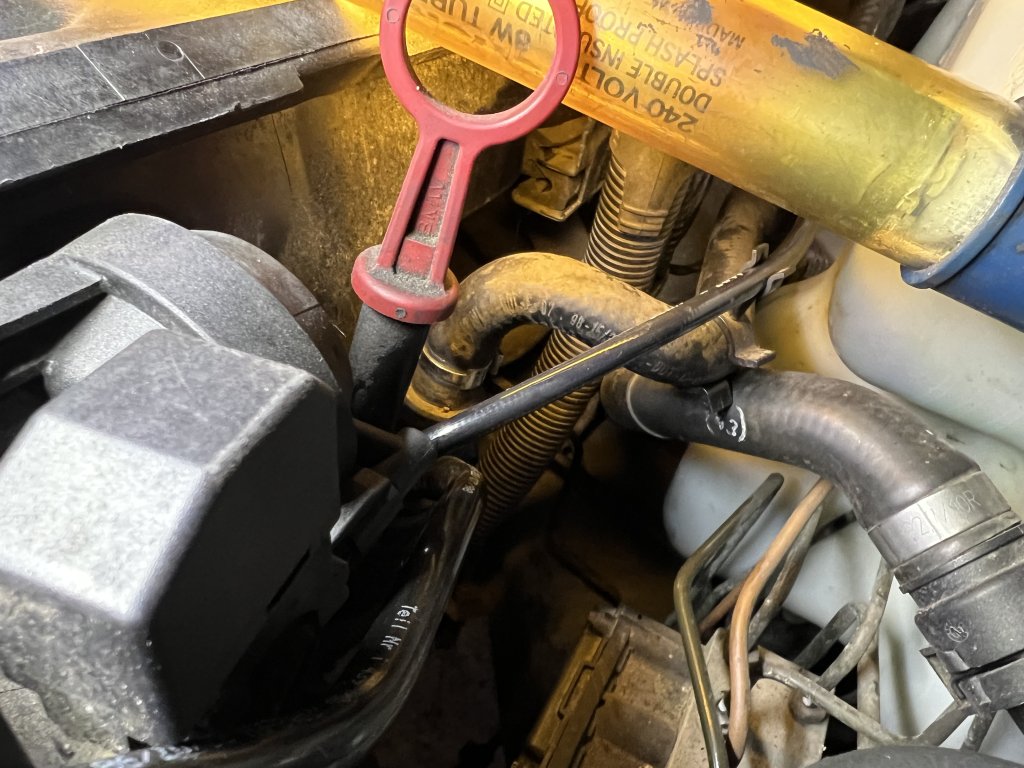 brake components also got a touch up with paint to help them stay tidy over the coming years. 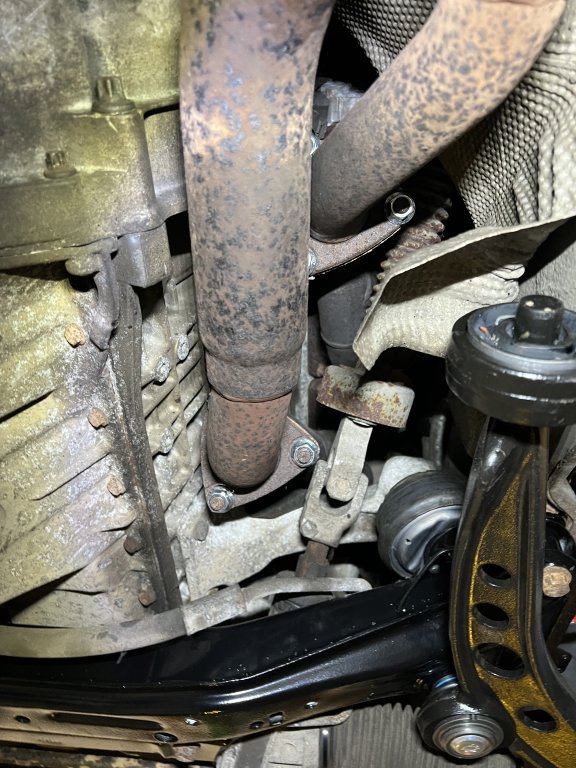 vacuum boost finally removed. Blank fitted to the engine and all the vacuum lines removed.

everything that was removed

the spare wheel carrier also went back on followed by the wheels.

we have a couple of bits left to fit, full service kit to do and she’s booked in for a two day ceramic Coat. Also all the power steering lines need changing, luckily all these bits are straight forward. She’s nearly there now!

2/3 Days of detailing has begun. This colour looks amazing. These photos are before it’s even been cut back. Wheels are also being painted so Mary’s sat on our MV1’s till they’re back. 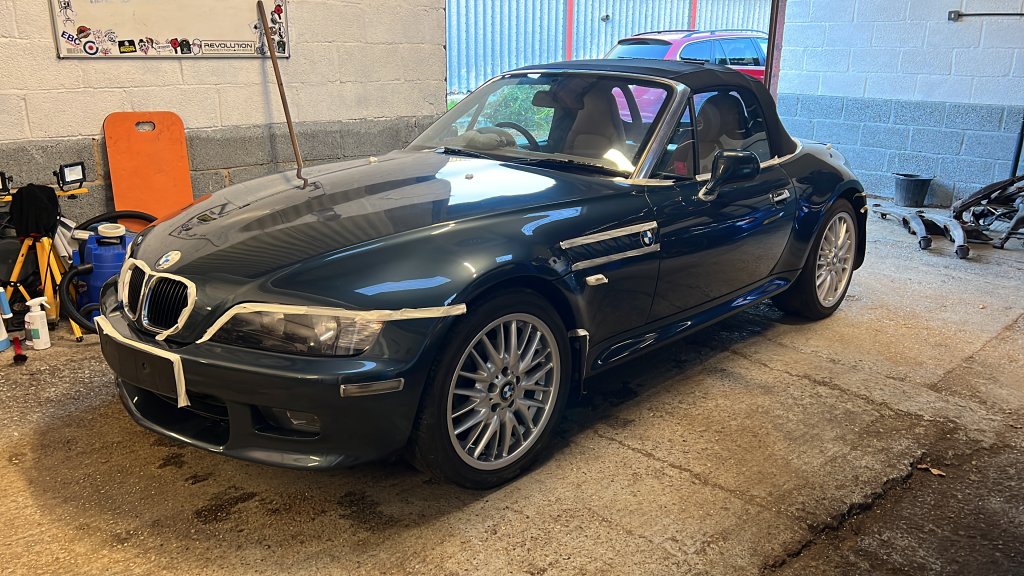 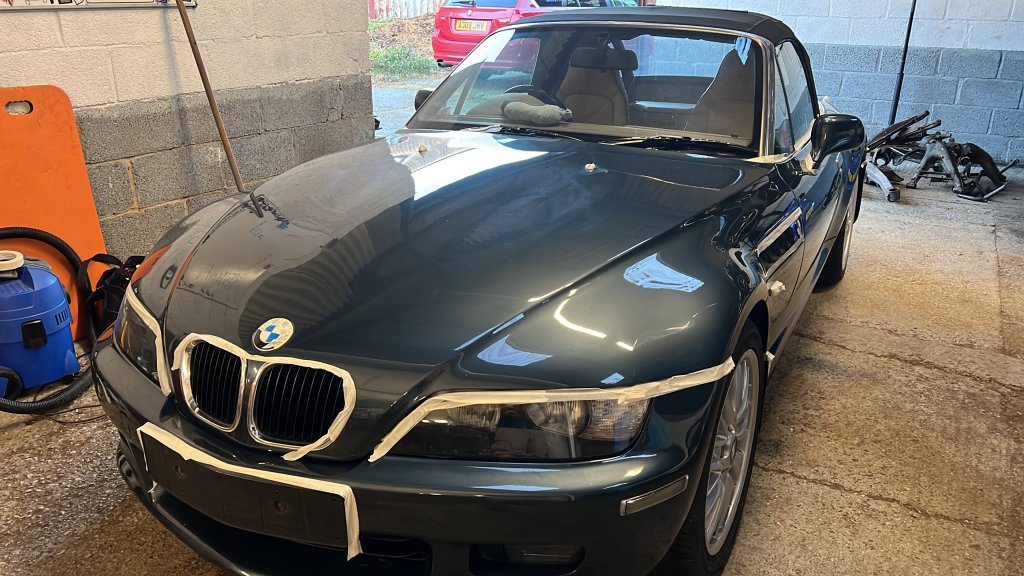 Lee said:
2/3 Days of detailing has begun. This colour looks amazing. These photos are before it’s even been cut back. Wheels are also being painted so Mary’s sat on our MV1’s till they’re back.
Click to expand...

RickyBobby said:
I need to buy another Z3 just to get it booked in for the full treatment like what Mary's had - how far out you booking Lee so I know how long I've got

it’s gone mad again mate, we caught up at the start of the year but now have a solid 25+ people on the wait list. The top 10 changes a little depending on location and jobs that need doing.

Some sneak peek photos. This colour looks mad! Now it’s been cut back. I’ll let the photos do the talking. 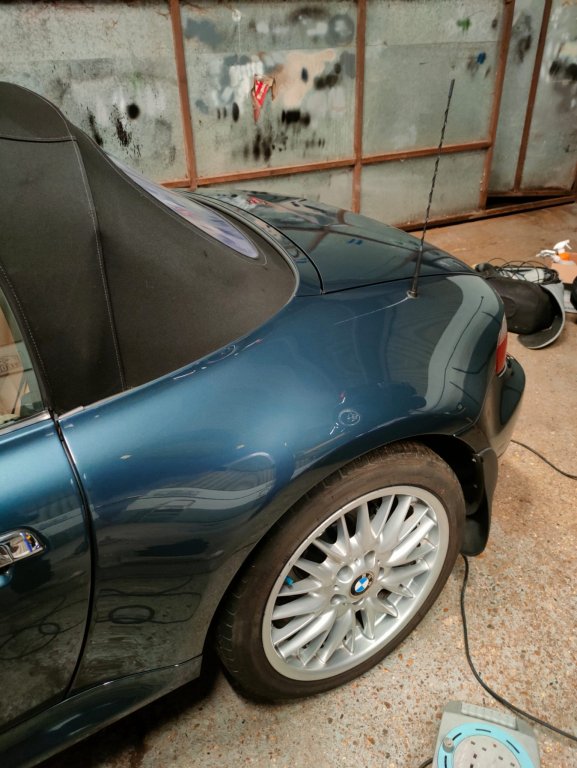 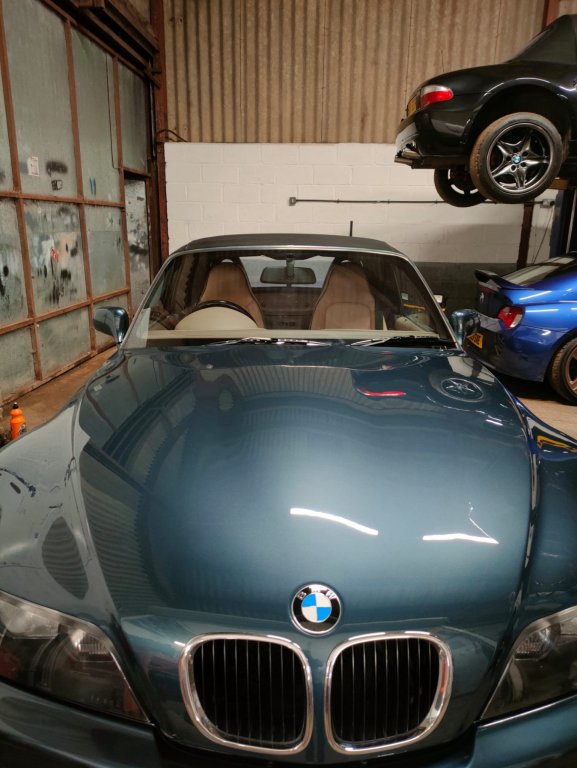 Lee said:
it’s gone mad again mate, we caught up at the start of the year but now have a solid 25+ people on the wait list. The top 10 changes a little depending on location and jobs that need doing.
Click to expand...

Absolutely stunning. I thought the respray that Sandydown Bodyworks was good but this is going to massively improve it

It's an awesome colour.

A top quality deep shine on that, great work

It's not how you arrive, it's what you arrive in that counts.

The first time I saw an Orinoco thought fantastic colour I really wanted one at some point .

The pearlescent paint looks slightly different depending on the lighting you have done an amazing job as always paint looks like new top work.
Stephen.
You must log in or register to reply here.
Share:
Reddit Pinterest Tumblr WhatsApp Email Link
Top